And I Darken by Kiersten White 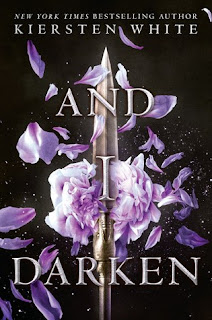 I expected something a little more different but And I Darken is everything I could have ever wanted in a book even though there is no magic! I can't believe what an amazing book Kiersten White has written and I expect for the whole trilogy to ruin me emotionally and I will enjoy every second of my misery. This is the effect And I Darken had on me.
Kiersten White writes in a beautiful and captivating way and I was immediately caught up in it. Her style is really good and I enjoyed it thoroughly. I couldn't be more satisfied with it than I already am.

And I Darken is like nothing I've read before! It's something completely new to me, I didn't expect to like it so much! It's a historical fiction about the female version of Vlad The Impaler a.k.a. Vlad Dracul- Lada Dragwlya later Lada Dracul. The book appeals even more to me because the story takes part in the time of the Ottoman Empire and there are mentioned Bulgarians and even Varna- my city! I totally loved everything about it and I will just comment the characters as usual.

Lada is a strong, ruthless heroine who I loved from the second she was born, literally. She is one of the strongest characters I've ever read about and she earned my respect when she was very young and then she kept proving that I respect her for a reason. She is frighteningly aware of the things that make her weak and easily manipulated and she does everything in her power to eliminate them even if it costs her her heart and happiness. Despite being distant to her brother and to their shared friend- Mehmed, she cares very much about them and protects them with everything she has. She is loyal and a very good friend and I couldn't like her more!

Radu is weird. He is Lada's far more gentle brother who is beautiful and more intelligent and clever than people realise. He is impressive but not as much as his sister and his role in the empire gets bigger and bigger with every chapter of the book. He is not strong, not by my standards anyway but he is a cutie that I couldn't help but like. In the beginning of And I Darken he cries a lot but their story begins with them being born so it is understandable. He grows in the shadow of his sister and therefore learns how to use this to his advantage. Radu is amazing in his own way and I enjoyed his chapters almost as much as Lada's.

Throughout the book the development of the Draculesti siblings is obvious and there is a big change in them. I expected Lada and Radu to work a little more together but the way things turned out to be are even better. They work very hard to protect Mehmed and Lada is maybe the best bodyguard someone will ever have. I also enjoyed pretty much the way their relationship with Mehmed was described and developed. I saw the feelings coming of course but I still loved it very much!

Nicolae is Lada's sidekick who is a very good and loyal friend to her. I was immediately impressed with him when he was first introduced to us. He is Wallachian and that's why Lada befriended him at first. He is one of the characters that I liked the best.

I love everything about And I Darken and I am even more fussy about Now I Rise! The first book is so amazing and overwhelming that I just cannot wait for the next one!
Published by YuliAtta at 17:03 ч.