In Blood We Trust by Elodie Colt 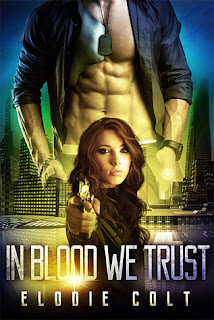 In Blood We Trust by Elodie Colt

I received this copy for beta reading and I will write a review because in its early version, In Blood We Trust totally deserves it.

I intended to beta read this book for about a week because I didn't know how much time I'd have and how long it is but instead, I was so caught up in it that I read it in one sitting. Elodie Colt writes amazingly well, especially for a first book! I was pleasantly surprised when I started reading because I didn't expect to be so caught up from the beginning! Not every book has a strong start but this one did the job just right!

I am a beta reader for plot holes mainly and characters and dialogues but there aren't any holes to fill in here and everything was so perfectly done that I became desperate with myself because I couldn't give a proper feedback! I can't even write my review now because the book is so good that I am still overwhelmed and speechless! The plot and the characters are built really well. All of them have their stories and they are revealed just in the right moment! Usually, when writing about the future, there are things that are always left out and I was waiting to spot that hole but NO, there aren't any! There is nothing that is left out and everything she's written is completed and whole.

Jordan has suffered a big trauma, resulting in her being a Serjeant in the NYPD specialising in murder and rape and her spirits from her past are haunting her and then everything goes down with two big and dangerous cases, challenging her not only as a Serjeant but as a person as well. She has to overcome her fears and do her job but she also wants to get her revenge. Jordan is determined, she is strong and a very powerful character. I liked the fact that Elodie Colt never forgets about Jordan's trauma and reminds constantly that she was a victim. It wasn't easy for her to open up to Aiden and then her friend but she did it and this is the most important thing!

Aiden Davis is the new Lieutenant in the NYPD and he makes an awesome first impression so I LOVED him from the beginning. He himself has had his fair share of trouble and this has made him just the right person for Jordan. He helps her all the time and every appearance he makes is impressive and so well-written that I couldn't help but love him as well.

Their relationship is developed really well, it can be followed from the beginning and it can be seen how they get closer and closer. They have to work hard to trust each other and to learn how to work together, especially since Jordan hasn't been able to open up and rely on any men in the past 6 years. Everything between them is written in a perfect way and I just made it seem as if the book is focused mainly on them which it is not- it is equally divided by the cases, their relationship and everything else.

The reason I focused so much on the characters is because they are one of the most important things in a book for me and the fact that they are so well-developed just made my rate even higher. There is nothing better than a strong character!

The challenges they have to overcome, the effort they have to put in their relationship and then the battles, the fights- everything is amazing and I am repeating only three words as if they are the only ones I know. There is action, love, sex, fear, death and violence and this book couldn't be more perfect!
Published by YuliAtta at 18:13 ч.